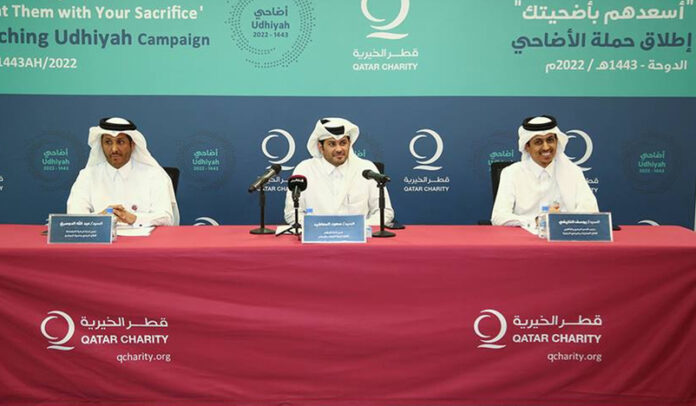 Qatar Charity has launched the campaign for this year “Hajj” pilgrimage 2022, under the slogan “Please them with your Sacrificial lamb.. for a dignified life”, to commemorate a great Sunnah and to enhance the principle of solidarity and compassion.

Through this campaign Qatar Charity is targeting charitable people in Qatar to support in providing nearly 50,000 sacrificial lambs and cows to be distributed in 40 countries worldwide, including the state of Qatar.

Million beneficiaries are set to receive this livestock for sacrifice, with a total cost of more than 29 million QR, the campaign also focuses on distributing sacrificial livestock within Qatar, including the countries currently suffering from crises and those affected by drought, especially in Somalia, in addition to poor communities in several African, Asian and European countries.

The speakers at the press conference urged philanthropists in Qatar on the occasion of the blessed month of Dhul Hijjah to expeditiously donate to the sacrifice campaign for Qatar Charity in order to reach the largest number of beneficiaries of this project, which will indubitably bring joy and pleasure to the hearts of the largest number of orphans, refugees, displaced people, the poor, and those affected by drought in these great and blessed days and contribute to alleviating their human suffering.

They also urged the media and influencers on social networks to support this important campaign.

The launch of the campaign coincides with the alarm of famine sweeping many African countries, threatening the lives of more than 20 million people in the Horn of Africa alone due to drought, high prices, and the recent high frequency of UN warnings, as its estimates showed that nearly half of Somalias population (7.1 million people) will face a crisis in food insecurity by next September due to an unprecedented drought in 40 years, and that 1.4 million of undernourished Somali children are facing severe malnutrition, prompting the philanthropists to double their donations to support this sacrificial campaign and to combat hunger as a fraternal and humanitarian duty, especially in these blessed days.

The campaign came under the slogan “Please them with your Sacrificial lamb.. for a dignified life” to make the sacrifice a season of expansion for those in need and those affected by the difficult conditions they are passing through, such as lack of food due to famine related to drought and drought, especially on holidays, and to contribute to providing them with a dignified life.

The sacrifice campaign inside Qatar is intended to provide 3,713 livestock, benefiting nearly 30,000 people inside Qatar, at an estimated cost of more than QR 3 million, with the aim of expanding on the target groups, in addition to 1,450 children benefiting from the Eid clothing at a total cost of QR 580,000.

The sacrificial livestock will be distributed to orphans and their families who are sponsored by Qatar Charity and families with low incomes in the external areas, in addition to workers in the ranches and their residences in cooperation with the different communities, people with special needs and students.

The campaign projects inside Qatar also include distributing Eid clothes to 1,450 people, benefiting 450 orphans and 1,000 children from low-income families, with the aim of drawing a smile on their faces on the occasion of the blessed Eid Al-Adha.

The campaign also dedicated the educational and cultural activities and events in shopping malls and commercial centers accompanying the “Please them with your Sacrificial lamb for a dignified life” campaign, including the “Pilgrimage Journey” event, which is a coexistence journey for children by designing models for Hajj rituals and distributing Ihram clothes to children, as well as an information challenge corner, a virtual reality corner and a tour of the Holy Grand Mosque and pilgrimage rituals, in addition to the “Al-Eid Cheer” festival, which targets orphans and their families.

The sacrifice campaign for Qatar Charity outside Qatar is intended to distribute nearly 46,255 sacrificial livestock in 39 African, Asian and European countries, and 925,102 people are expected to be the beneficiaries, at an estimated cost of about QR 25.6 million.

The campaign focuses on regions and countries that grapple with exceptional events and circumstances, such as the displaced people inside Syria, Syrian refugees in neighboring countries and Palestine, including those affected in Yemen and those affected by drought, especially in Somalia, in addition to the poorest groups in other targeted countries.


First Branch of Sorbonne University Opens in Doha
HE the Chairman of Board of Trustees of Lusail University, Dr Ali bin Fetais al-Marri, announced the official inauguration of the first Sorbonne Unive…