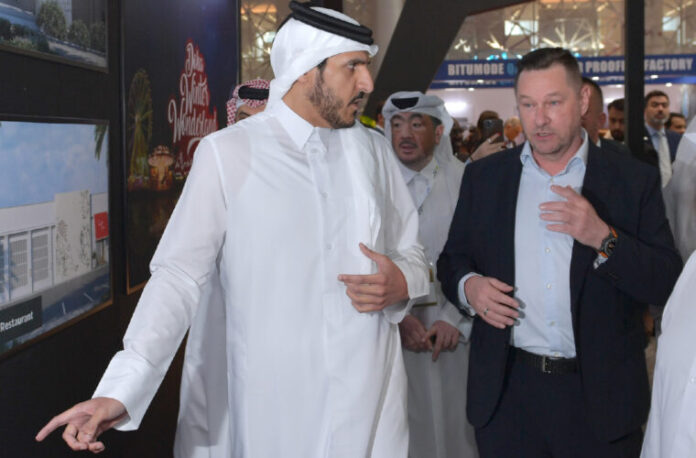 H.E. the Minister of Commerce and Industry Sheikh Mohamed bin Hamad bin Qassim Al-Abdullah al-Thani inaugurated the exhibition and led the inauguration ceremony to walk through the pavilions and explore the exhibitors’ services and products.

The opening ceremony was attended by a number of officials, dignitaries and representatives of the participating official authorities, including Eng. Youssef Abdul Rahman Al-Emadi, Projects Affairs Director at Ashghal; Mr. Fahad Rashid Al Kaabi, CEO of Manateq; Eng. Abdullah bin Hamad Al-Attiyah, CEO of Qatari Diar; and a delegation from the Council of Saudi Chambers of Commerce headed by Mr. Mohammed bin Abdullah Al-Murshed, along with ambassadors of the participating countries.

Visiting the Estithmar Holding pavilion as part of his inaugural tour, H.E the Minister of Commerce and Industry listened to a brief from the group’s CEO Henrik Christiansen about the mega projects that the group is currently working on. This brief mainly focused on Al Maha Island, which hosts Doha Winter Wonderland, an international restaurants district, concert arena, and beach club, as well as hospitality, catering and event management services provided by its subsidiaries.

The Council of Saudi Chambers delegation also visited the Estithmar Holding booth, where they met the CEO and a number of its executives. The delegation listened to an overview of the group’s current expansions and growth across all sectors.

Speaking on the occasion, Henrik Christiansen, Chief Executive Officer of Estithmar Holding, said: “Our new trademark represents Estithmar Holding’s futuristic strategy and its ambitious expansion plan in multiple sectors, which will positively enhance the business growth and continuity, and contribute to increase the shareholders’ value at the same time.”

“This year, at Project Qatar, we showcase our prominent projects in vital and promising sectors. In the tourism sector, we work on Al Maha Island project in Lusail, set to become a hotspot for Qatar tourism, entertainment and leisure and expected to have more than 1.5 million visitors per year. Al Maha Island includes wide range of entertainment, hospitality and dining choices, namely: Doha Winter Wonderland, spanning over 92,000 square meters with 100 rides, the concerts arena which accommodates 7,000 people, in addition to Nammos beach club and a variety of international restaurants such as: Zuma, Billionaire, LPM, Dokya, and Em Sherif, along with a selection of the most famous local restaurants,” Henrik added.

He added, “As for healthcare projects, we are set to open two international hospitals in partnership with reputable international healthcare institutions by end of this year. The first is The View Hospital in partnership with the American Cedars-Sinai. The hospital includes 244 beds and 71 luxurious treatment suites, while the second project is the Korean Medical Centre in cooperation with the finest medical service providers in Korea. It includes 46 outpatient clinics, 18 operating beds and 3 operating rooms.”

Last week, Estithmar Holding announced that its subsidiaries have established 6 new companies in the tourism, entertainment, hospitality and catering sectors, bringing the total number of its affiliated companies to 45. This step reflects the group’s expansion, especially in the promising sectors with a projected increasing demand, that will lead to increase the group’s revenues.

Estithmar Holding and its subsidiaries are always keen to participate in various international exhibitions and events that are held in Qatar in different fields and sectors, especially Project Qatar and Hospitality Qatar. This stems from the Group’s firmly belief in the importance of such major exhibitions and the role their roles in supporting and opening new horizons for the business community and companies of all sizes, in addition to providing an effective platform for direct communication, holding fruitful meetings and partnerships to form new business alliances with added value to the local market that contribute to enhancing the investments in the State of Qatar.

Project Qatar is one of the leading international exhibitions in the field of construction technology and building materials for more than 17 years in Qatar and the region. It provides an opportunity to learn about the latest technologies, specialized equipment, and international best practices in this field, in addition to being a unique opportunity to showcase the most prominent major projects that the exhibiting companies are fulfilling.

Cuizina, the subsidiary of Estithmar Holding, had a remarkable participation in Hospitality Qatar this year as well. The exhibition is a great opportunity for companies in this field to be aware of the latest developments in hospitality locally, especially in light of expected growth indicators of the hospitality sector during the coming period, and the increasing importance of the pivotal role played by this sector in supporting the diversity and competitiveness of the national economy.